A wide (and dry), brown land

Closer to arriving at my long-time friends in the mid afternoon, about 425 klms. from home, this was typical roadside wattle, lots of it. 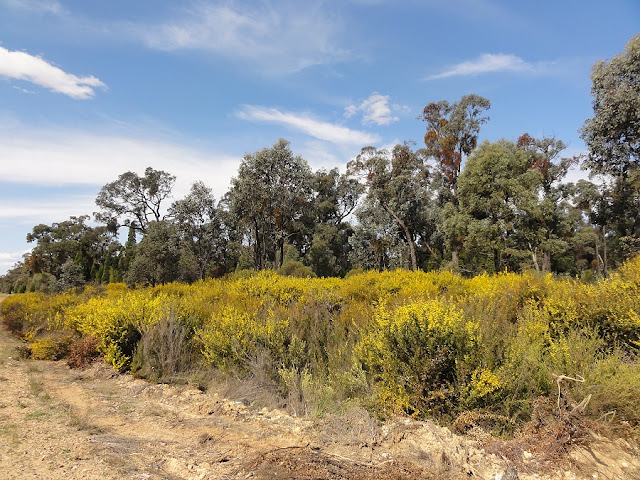 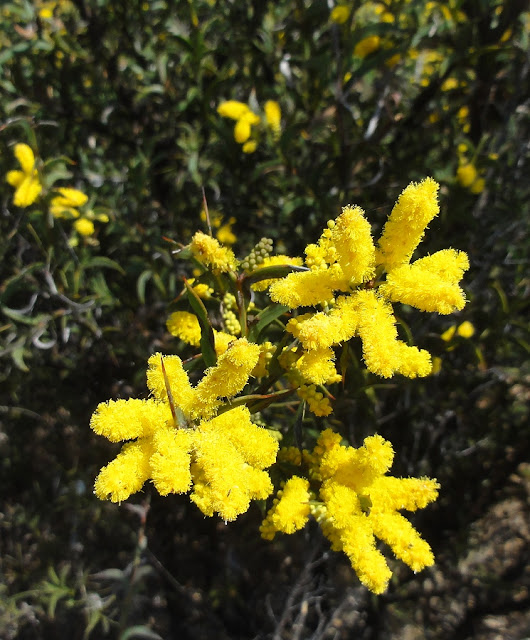 The continuing journey, after breakfast the following morning though, to see Marshes country, was to be one 'just for us two girls', in their 4-W-D ute.  Message was, water was 'up' and we'd need this for access (to the birding lookout as it turned out). 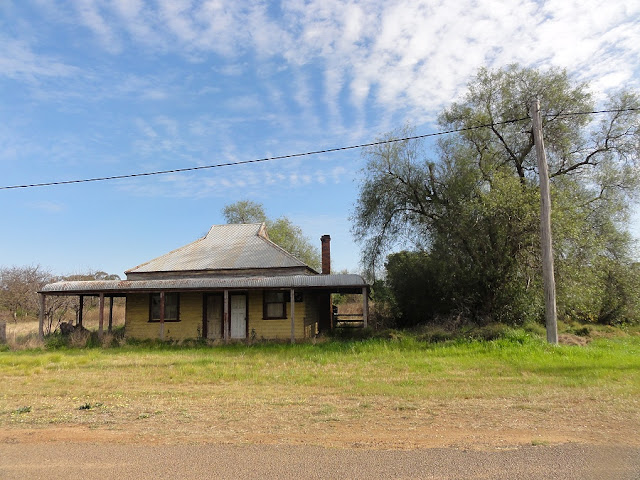 Along the way, a little old-timer with a pepper-corn tree alongside. 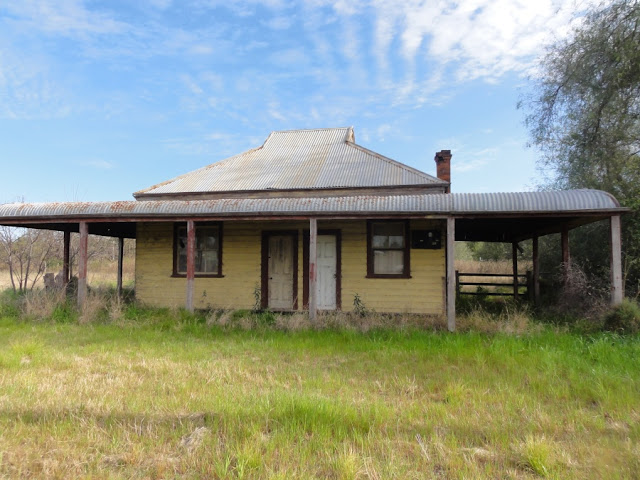 I have to wonder though, about the two doors side-by-side.  His 'n hers? Looks perhaps a later addition, that white door. Power box beside the window there was typical for the old homes. 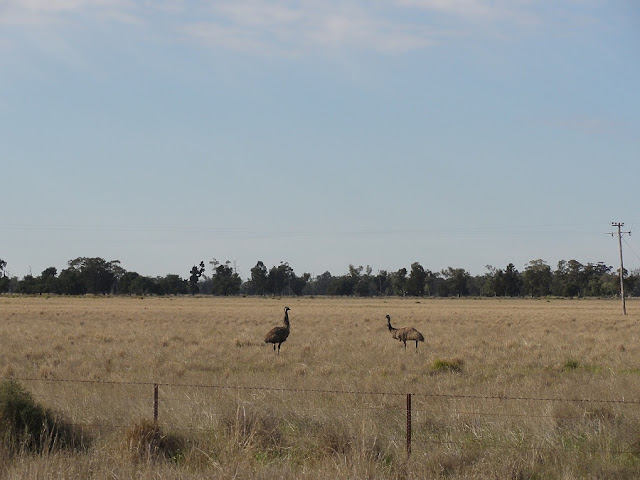 From time to time emus were spotted and we'd pull up to get photographs if they were reasonably close to the roadside, but every time, they'd run off.  Such a big bird, they amazed me how timid. 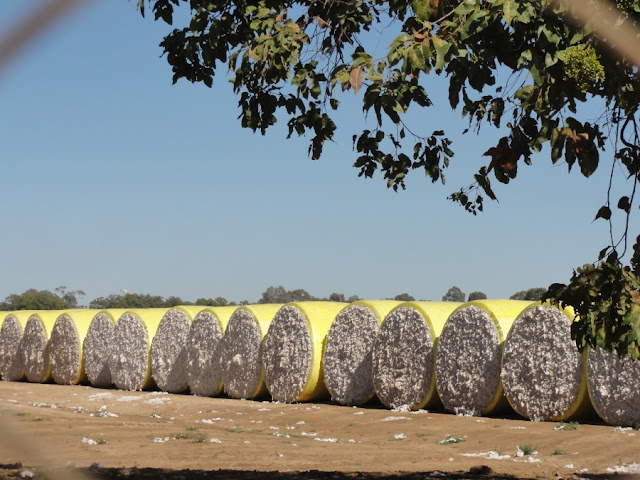 At Warren, central western N.S.W., a peek through the fence to the Queensland Cotton gin, where earlier this month it was reported on ABC Rural, fire had destroyed $7 million worth of cotton bales.

Before we get to see any marshes though, you've got to experience the 'other side' of the country, as we did, nearby at Willie's Retreat.

One highlight not to be forgotten in a hurry; when driving along the road searching for this entry gate, was seeing a wedge-tail eagle in flight, carrying a snake.  It was the most amazing thing to witness; if only I could've caught the one-in-million chance photograph!  Not to be, but here is gate #1, of three to open-shut before reaching our on-site caravan for that night.

The purpose of staying here was its access to the Macquarie Marshes.  We'd both thought some of the marshes was within walking distance of Willie's Retreat, but not a drop of water to be seen. 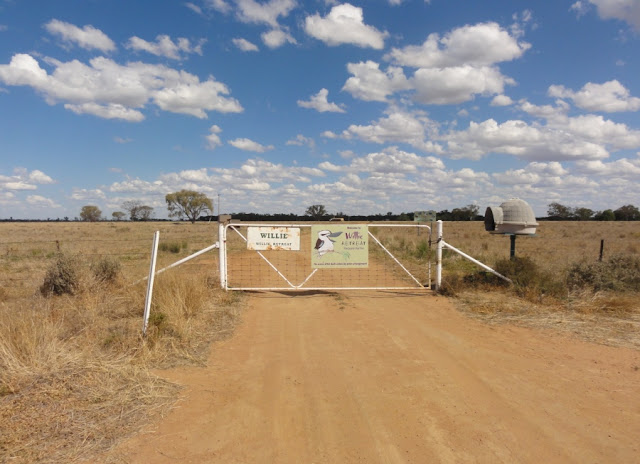 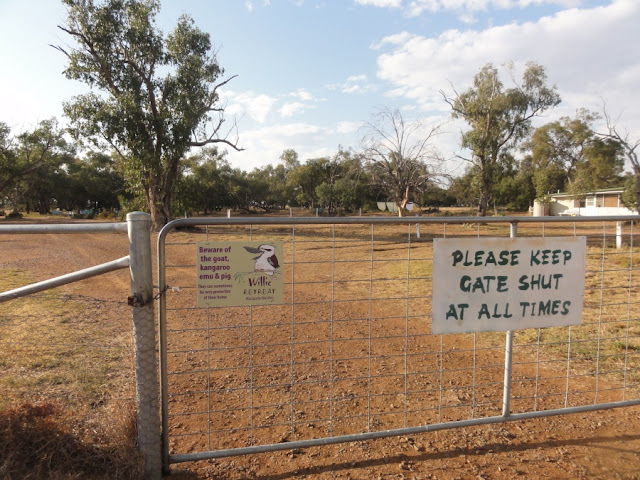 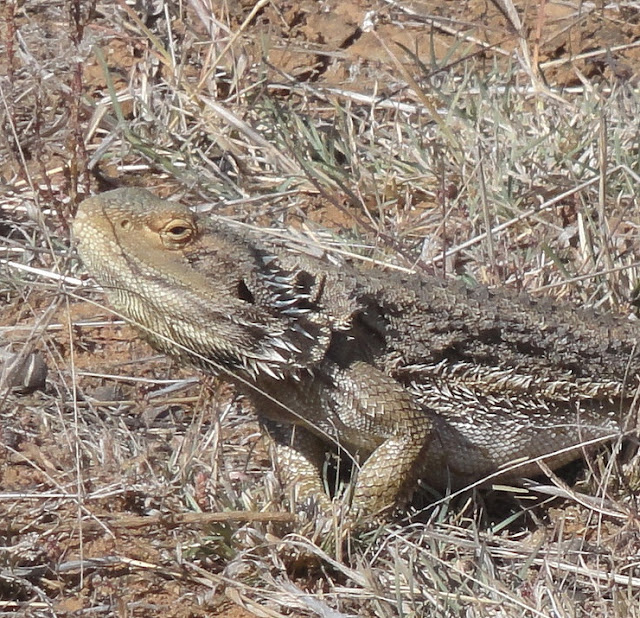 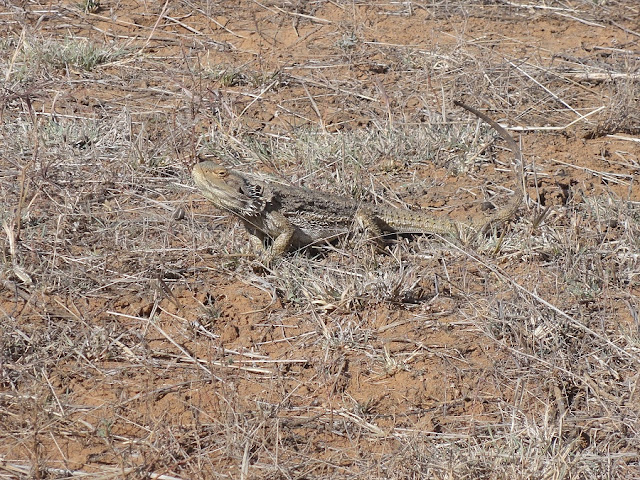 This is real rural Australia Carole ....The old timer house has that wonderful wide verandah running all around the house providing much sought after relief from extreme weather .... How sensible is that... I only wish they would build houses like that now.
I've always been a bit nervous around lizards but apparently they are harmless .... your bearded dragon is certainly well camouflaged.

Beautiful pictures Carole, pity you the eagle with snake could not shoot.
The bearded dragon I find beautiful, just that the emus in the wild walking around here in the Netherlands is not possible.
The second picture of the yellow plant is also great.
Have a nice Sunday.
Greetings Irma

I sometimes wonder how people can live in such a dry deserted area in such a small house. It looks abandonded however.

wow, great views. i really like the cotton shot. (:

Great set of shots - shame the marshes were dry - where has all the water gone? We have hardly been short of rain!

oh Stewart, the marshes are coming in following posts ... we've got to get through the dry photos first :) holding onto the sequences in this journey

I'm sure this has been the best year for wattles in living memory! And loving that outback sky ... look forward to the next instalments!

I'm liking this tour. Have never seen anything like it! That Dragon is interesting.

Great journey Carole...and so nice you can travel with a friend!!! Head 'em up and move 'em out...looking forward to the next installment! great shot of the dragon!!!!!
Paper Hugs,
Jan

Those are bales of cotton! They are HUGE!!! I would love to see emu running around wild...

That old building is wonderful!! I love finds like that. I feel like I've hit the jackpot!!