I have written before today, that "I can't draw" but I am however, drawn to blogs that do display this creative talent. It didn't stop me stepping outside this afternoon and trying to sketch the flapjacks.

It was a bit of a hit and miss attempt, however, this is what I managed. I liked the colours a lot, but not the shapes and lack of balance. Figured perhaps this could be considered my first practice run; and the first time I've really tried something like this at all. It could easily have just gone into the bin as a non-event. 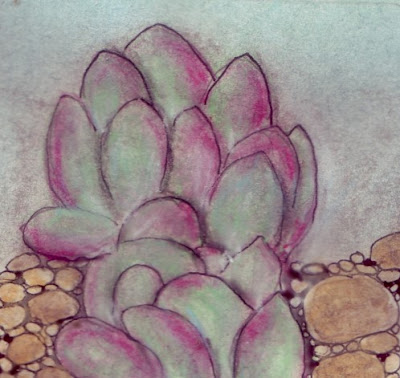 However, I was pretty happy with some added effects, after scanning... 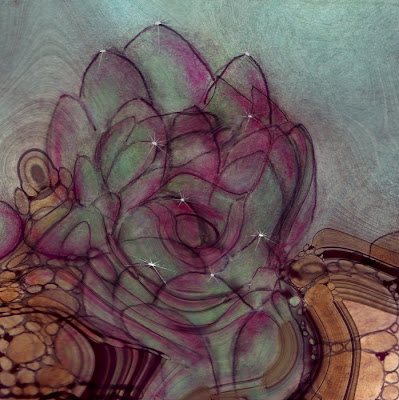 Here's a new look, after taking the makeshift sketch into my graphics programme Corel's PhotoImpactX3, and blurring some of the colours a touch first.

Then applied Flaming Pear plug-in, Twist, with some variations to the sliders.

Now my fantasy cacti-succulent needed some thorns, so I made some of those with the line/arrow tool, and used the rotate-freely, and rotate-virtual-3D, to the finished thorn objects. Now I could have easily gone overboard with the thorns! They appeared like twinkling lights I thought, and made the image pop some.

The thorns look like little sparkles of light, perhaps with a bit of dew. I like your rocks too!

I like the PhotoImpact work. It's a program I like to use as well albeit an older version. The translucence in the colours is a great effect.
Thanks for coming by my blog. I will get onto answering your newsy email.
Best,
Ros.

Kudos to you and your 'artistic' ability Carole...you can't say you don't have any drawing ability anymore! This project is lovely!!!!
Jan